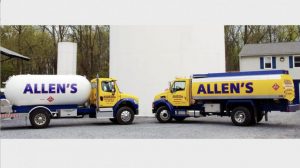 Vantage Commercial is pleased to announce the sale of a large, family-run propane company based out of Hainesport, NJ. Penn Jersey Propane operates a bulk plant along with several bobtail trucks, used to service their substantial customer base in New Jersey. Penn Jersey Propane was owned and operated by Kauffman Gas based in Atglen, PA.

Ken Richardson, Executive Director at Vantage Commercial, worked with Chris Kauffman, owner of Kauffman Gas, to source a buyer for the off-market asset. Ken leveraged his network and secured an interested party within weeks of ownership’s deciding to sell the company.

“I appreciated Ken helping me sell my business and working through the normal deal dynamics along the way,” Kauffman stated.

“It was a pleasure working with Ken and Chris throughout the process. Our companies were very well aligned, and the deal went smoothly,” Allen stated.

“Penn Jersey and Allen Oil and Gas are a natural fit. From the initial meeting, Jason and Chris talked about propane and the deal developed from that point. I am pleased that I was able to meet the goals of both families in this transaction,” Richardson stated.