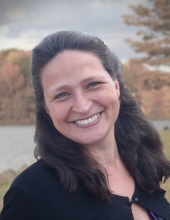 Katina Pearl-Blando, 51, of Robbinsville, passed away on Saturday, October 1, 2022, at Princeton Medical Center in Plainsboro, NJ.

Born and raised in Manhattan, Katina was a graduate of The Marymount School of New York, Class of ’88. She graduated from Columbia University, Class of ’92 with a BA in Psychology and earned her Master’s Degree from Columbia University Mailman School of Public Health in ’96. She started her career at the New York City Department of Health and Mental Hygiene, where she served as a Senior Public Health Educator and Policy & Planning Analyst in the Lead Poisoning Prevention Program. Katina worked as a Project Director at Genecom – during which time she met her husband Ken while they were working together at Bristol Myers Squibb. Most recently, Katina was Managing Director at Association Associates, Inc. of Hamilton, serving multiple clients including serving Executive Director of the New Jersey Propane Gas Association.

Katina was a child actor in television commercials and off-Broadway theater professionally. She served as a volunteer on the Floating Hospital in NYC providing healthcare to families in need, as a teenager. And later, as a mother, Katina was involved with numerous school activities and Girl Scouts, and she coached a team for the National Destination Imagination competition for several years with her children and their classmates. Katina loved to play Sudoku, do complex puzzles and sing her own made-up lyrics to popular songs. Above all, Katina adored her family and especially cherished the time spent with her children. She was a member of St. Gregory the Great RC Church in Robbinsville.

Predeceased by her father, Irwin Pearl and her mother-in-law, Jacquelin Blando; Katina is survived by her husband of 21 years, Ken Blando; her children, Jonathan, Ava, and Katherine Blando; her mother, Anita Pearl; her sister, Renee Alevras (whose husband Colin passed away hours after Katina in NYC of cancer as well); her father-in-law, Joe Blando, her brothers-in-law and their wives: Michael and Janeen Blando, James and Tara Blando; her sister-in-law and her husband, Lisa and Joseph Rizziello; and her many nieces, nephews, cousins and loving family members and dear friends.

Visitation for family and friends was be held on Sunday, October 9, 2022 and a Mass of Christian Burial was celebrated on Monday, October 10, 2022 at St. Gregory the Great RC Church in Hamilton Square, NJ 08690.

In lieu of flowers, contributions may be made in Katina’s memory to the Target Cancer Foundation, which focuses on research and treatments for rare cancers. https://www.targetcancerfoundation.org/support-us/donate/

“Katina was a pleasure to deal with,” said Shane Sweet of Propane and Oil Training and a former Executive Director of the New York Propane Gas Association. “I had the privilege of working with her on a couple of projects, including joint meetings between the New York and New Jersey associations.”