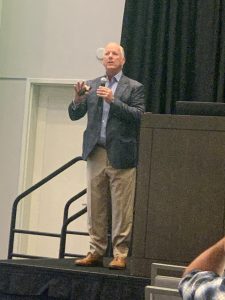 PERC President and CEO Tucker Perkins recently penned an opinion for the Tallahassee Democrat about the need for Floridians to embrace propane as an alternative to reliance on the electric grid. “Floridians should not have to worry about blackouts, and yet, the North American Electric Reliability Corporation is warning of potential energy shortfalls this summer,” Perkins wrote. “Above-normal temperatures are already stressing the electric grid, and summer has just officially started.”

Noting the National Oceanic and Atmospheric Administration is expecting an above-normal hurricane season, Perkins points out that there is an increased frequency with which severe weather threatens and reminds us of the effects of carbon-induced climate change, just how vulnerable our electric grid is, and how important it is to embrace the idea of resiliency.

With fewer than two dozen major disruptions in 2000 that caused extended blackouts, the number in 2020 was 180 and the economic toll of extreme weather events was roughly $329 billion globally.