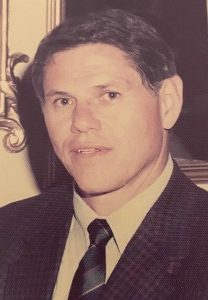 Thomas Lee Cadenhead lived a victorious life overflowing with his four favorite things of family, friends, sports, and business. He died April 4, 2022 at the age of 87 in the presence of his loving family in Dallas, Texas.

Born June 3rd, 1934 and raised on a farm, he attended school in his hometown of Lubbock. He met the love of his life, Diane, when he was 13 and she was 12. Thomas had stopped by Diane’s house with a friend and a year later he started driving her to school. The rest is storybook romance history. They were married in 1952 and have been chasing their dreams together for 70 years. Their first child, Cynthia, arrived when the newly minted Cadenheads were 17 and 18 years old. John, their son, followed two years later.

Thomas was a football player at Lubbock High School where he helped take the team all the way to Texas State Championship in 1951. The other players called him “Big Train” for his exploits and strength on the field.

After playing football on a scholarship and graduating from The University of Texas at Austin with a B.B.A. in Personal Finance Management, he joined his father in the propane business at Quality Steel Inc. in Lubbock. That was followed by work at Trinity Industries until he and his son, John, established Cadenhead Servis Gas.

Keenly aware that his own father had died of heart related issues too early at 54 years of age, Thomas was looking for answers of how to live with a healthy heart. In the late 1960’s he ran across an article about Dr. Kenneth Cooper in Reader’s Digest. What started out as a “jogging habit” to improve his cardiovascular fitness turned into a life-long friendship for him and Diane with Dr. Ken and Millie Cooper. That friendship and “The Cooper Institute” allowed Thomas to beat the odds over and over again. He showed courage and resolute stoicism through years of challenges concerning his heart. Armed with his favorite quotes, “Let the Good Times Roll”, and “Keep On Keeping On”, he just kept on keepin’ on. As his daughter Cynthia, and son, John, are fond of saying, “Dad was one tough guy!”

Thomas will be missed by his family and friends. He is survived by his wife Diane, daughter Cindy and son-in-law Teddy Jones, son John C. Cadenhead and daughter-in-law M’Chelle, four grandchildren and ten great-grandchildren.

His love of sunsets at his home in Santa Fe, New Mexico with family and friends is reflected by their choice to place his remains in the Sunset Columbarium at Sparkman-Hillcrest.

In lieu of flowers, donations to The Cooper Institute are greatly appreciated by the family.