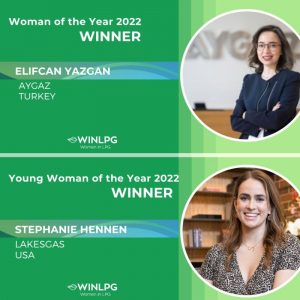 “We are proud that Lakes Gas’s own Stephanie Hennen has been named as the World LP Gas Association’s Young Woman of the Year for 2022,” said Trent Hampton, CEO of Lakes Gas in Minnesota. “The honor was announced at the WLPGA’s annual meeting in New Delhi, India. Congratulations, Stephanie!!”

Hennen is Manager of Marketing and Customer Service for Lakes Gas. She has previously served as Trade Show Coordinator for Marshall Excelsior and Superior Industries. In addition, she has worked in marketing for both Westmor Industries and CHS. Hennen has also held several volunteer roles in the propane industry including Chair of the NPGA Conventions Committee.

“I’m humbled by this award and for someone who’s usually pretty chatty when it comes to my profession, I can’t think of much else to say except ‘Thank you’,” Hennen said in a post on LinkedIn. She thanked friends, family and colleagues who have always supported her. “Thank you to all of the strong women that have come before me to help pave the way,” she said. “And a huge thank you to this industry. You continue to bring good people into my life. You’ve helped foster my passion, you’ve given me a voice to campaign for young professionals and you allow me to work toward a brighter, more sustainable future.”

The 2022 Woman of the Year, Elifcan Yazgan, is Business Development Manager at Aygaz in Istanbul, Turkey.