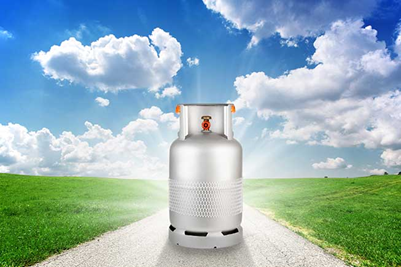 It burns just like propane, smells just like propane, and gets transported just like propane. But instead of being extracted at gas processing plants or refineries, it is produced from renewable feedstocks like used cooking oil or soybean oil, and so it has a low carbon intensity. That means it is eligible for low-carbon fuel credits, like those available in California. Renewable propane has been around for years but has never gotten much traction due to a combination of technical and economic issues. Now that is changing, with a deal announced last week by a major propane retailer and a biorefiner showing the way to a win-win-win for the producer, the marketer, and the environment. In today’s RBN blog, we begin a deep-dive series on where renewable propane comes from, why it has been a challenge to get the market going, and what changes may create significant opportunities across the renewable propane value chain.

Propane, whether it is the traditional hydrocarbon product or the renewable variety, is a byproduct. It is made while producing something else. In the traditional hydrocarbon propane market, about 87% of annual U.S. supply is a byproduct of natural gas production and processing, while 13% is a petroleum refinery byproduct. When processing associated and rich gas, it is necessary to remove the propane (and most of the other NGLs) in order to make the natural gas suitable for delivery into pipelines. Refineries produce propane from crude oil as an integral part of the refining process used to make gasoline, diesel, and other petroleum products. So in both cases, the propane gets produced concurrently with primary products, and thus must be sold and transported to a market.

Similarly, renewable propane is a byproduct of a biorefining process in which the primary product is renewable diesel. Renewable diesel, or RD, has emerged as a super-hot commodity in the past couple of years, as we’ve discussed in a number of blogs, including Playin’ by the Rules. There, we covered some RD basics, including the important facts that renewable diesel is produced from lipids (such as vegetable oil, used cooking oil, animal fats, etc.) and is essentially chemically identical to petroleum-based diesel. That means that it can be used as a direct “drop-in” substitute that is not subject to any blending limits (unlike biodiesel and ethanol). Then, in Green Grow the (Refineries), we zeroed in on HollyFrontier’s plan to shut down its petroleum-based Cheyenne, WY, refinery and convert it into an RD facility. Most recently, in our Come Clean blog series on low-carbon fuel standards, we said that the excitement around RD had continued to grow, and that the amount of operating and planned RD capacity had increased to 7.2 billion gallons per year (gal/yr), or 2.5 times the operating and planned capacity at the start of 2020.

Without special incentives, that cost-benefit equation does not pencil out. (For that matter, neither do the economics for most renewable diesel.) But if you factor in the value of credits from California’s Low Carbon Fuel Standard (LCFS) program and the EPA’s Renewable Identification Number (RIN) program, the margins can become quite attractive, especially if there are buyers out there who are willing to pay a “green premium” for a product that can be marketed to their environmentally conscious customers.

That’s just what happened back in 2020 when U-Haul teamed with national marketer Suburban Propane to supply renewable propane produced from the Renewable Energy Group (REG) plant in Geismar, LA. That deal has been moving renewable propane by railcar to California for the past couple of years, and is by far the largest renewable propane marketing arrangement in the U.S.

Unfortunately, that one deal makes up almost all of the renewable propane being produced today in the U.S. So right now, it’s a round-off error in the domestic propane market. But that’s in the process of changing. As we detailed in our November 2021 Drill Down report —titled Renewable Diesel’s Advantages Put It In The Driver’s Seat — a lot of renewable diesel manufacturing capacity is being developed. Today, stand-alone capacity is about 40 Mb/d and another 140 Mb/d is under construction. There is also another 20 Mb/d or so of co-processing capacity already operating or soon to be online inside traditional refineries. In addition, another 335 Mb/d of RD capacity at locations across North America has been announced. 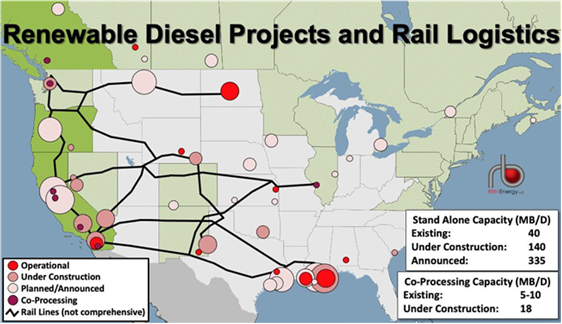 The map in Figure 1 from that report shows existing (red dots) and planned (pink dots) for renewable diesel facilities — the larger the dot, the higher the capacity. The existing capacity is mostly in Louisiana, California, and North Dakota. The black lines on the map show the rail lines that can be used to transport renewable diesel from refineries to existing and prospective LCFS markets (dark-green and light-green shaded areas, respectively).

But will the propane yield from these facilities be produced and marketed? We think the odds look a lot better after a deal announced last week between a major propane retailer and a California biorefiner. The producer is Global Clean Energy Holdings (GCEH), a Torrance, CA-based biofuels company that processes, refines, and distributes renewable diesel. In May 2020, GCEH purchased the former Alon Bakersfield Refinery from Delek US for $40 million with a plan to retool the facility to produce renewable diesel, and possibly renewable jet fuel. Announced plant capacity is 15 Mb/d. The plant is expected to start up sometime in the first half of 2022. As the project proceeded, GCEH said nothing about an intent to produce renewable propane. Until now.

Last week, GCEH and AmeriGas, a subsidiary of UGI Corporation and the largest retail propane marketer in the U.S., announced a deal for AmeriGas to purchase and distribute renewable propane from GCEH’s Bakersfield biorefinery. GCEH will produce approximately 13 million gallons of renewable LPG during the balance of 2022, making it the largest commercially available renewable propane production facility to date in the U.S., and 2 to 3 times the volume produced by REG Geismar (though, as we mentioned, REG is planning an expansion). AmeriGas will market and distribute renewable propane to its customer base, primarily in California, making the product eligible for the state’s LCFS credits.

The deal is described as a multi-year “partnership,” which we understand means that it goes further than a simple supply arrangement. In order to make the economics work for both AmeriGas and GCEH, it incorporates sharing mechanisms across the value chain. That way GCEH can make the investment necessary to process the propane into a commercial product, and AmeriGas can incorporate that product into its distribution and marketing network. AmeriGas will be the long-term exclusive buyer of renewable propane from the plant.

(We at RBN have a long history with the Bakersfield refinery, with Rusty working NGL supply/demand and crude supply for the plant during the 1980s with Getty Oil and Texaco. The refinery has had many owners, going back to Mohawk Petroleum (1932-75), Getty (1980-84), Texaco (1984-2000), and Shell Oil (2001-05). The refinery was acquired by Alon in 2010 but the facility was eventually shuttered and has been idle for several years. When operating as a traditional refinery, it had a capacity of 66 Mb/d. At one time, the refinery was the largest supplier of asphalt in California.)

We expect that GCEH and AmeriGas will be looking at a whole range of strategies to expand their partnership and improve the value chain economics for renewable propane, including using feedstocks with super-low LCFS carbon intensity scores (camelina oil, for example), incorporating carbon capture and storage (CCS) into the manufacturing process, using renewable coproducts (renewable butane, renewable naphtha) to displace natural gas, and even plugging renewable power into the process. 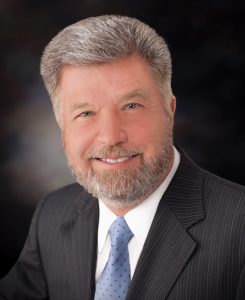 Deals like this one suggest that a lot more renewable propane could be pulled out of the many renewable diesel facilities that will be coming online over the next few years. In the next blog in this series, we’ll examine in more detail how such arrangements might work, including a nuts-and-bolts look at the sharing mechanisms that can benefit RD refineries and renewable propane marketers alike.

Rusty Braziel is the president and CEO of RBN Energy, a leading energy market consultancy and analytics company based in Houston, Texas.