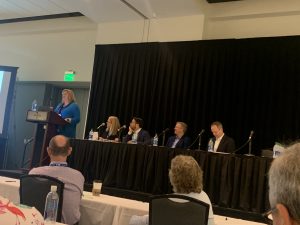 While the Southeastern Convention in Nashville April 24-26 was a fun chance to see familiar faces and get caught up with friends not seen since before the COVID-19 pandemic, there was a lot of important business to address as well. The future of the industry is threatened by those who seek to ban fossil fuels and ‘electrify everything’ with a short-sighted view of an effective way of cutting carbon emissions and helping to protect the environment.

One of the first sessions early Sunday morning, the first day of the conference, was called “The Heat is On: Gas Heating Bans and Electrification – Lessons Learned from Governmental Action in Europe and Beyond.” Moderated by Alison Abbott, Communications Director for the World LP-Gas Association, the session covered details of challenges propane faces in countries around the world.

According to Michael Kelly, the WLPGA’s Chief Advocacy Officer, rooftop solar panels, heat pumps and energy savings to reduce dependance on fossil fuels and make homes and buildings more energy efficient are key tactics to make Europe free of fossil fuels by 2030. A goal of 30 million heat pumps in Europe is set for 2030 which has only 1.5 million in place currently.

Beyond Europe, in Australia, the industry is lobbying the Australian Building Codes Board and highlighting the benefits of all gas homes. A Gas Vision has been created for downstream gas industry to show potential decarbonization pathways. While a climate change commission proposed legislation to ban gas in new builds, the policy was paused by industry intervention. The government introduced a Renewable Gas Mandate requiring procurement targets and goals for renewable LPG and hydrogen, through to 2050.

Challenging the value of heat pumps is a major hurdle in Australia as well as countries all over the world. “In Canada, temperatures haven’t gotten below 25 degrees as much as usual during the past few winters,” said Allan Murphy, Senior Vice-President, Government Relations for the Canadian Propane Association. “Heat pumps don’t work very well with temperatures below 25 degrees.” He noted that the provinces of British Columbia and Quebec are banning the use of fossil fuels for heating.

In British Columbia, Vancouver has new laws effective January 1, 2022, equipment for space and hot water in new low-rise residential buildings must be zero emissions. By 2025, all new and replacement heating and hot water systems must be zero emissions. In Quebec, laws went into effect December 31, 2021, oil-powered heating is banned in all all new construction projects in the province. Effective December23, 2023, it will be illegal to replace existing oil furnaces with any sort of heating system powered by fossil fuels.

Murphy believes renewable propane is a game-changer and will help bring about plans for net zero emissions. “People who are in sectors such as agriculture applications and restaurants know the benefits of propane but many in the public at large do not yet see the difference between oil and propane as night and day.”

“The Canadian Propane Association has consistently stated support for reducing Canada’s carbon footprint,” Murphy said. “However, any reduction in energy options for Canadian consumers, particularly related to natural gas, and therefore propane, is detrimental to consumers and manufacturers.”

“The Canadian Propane Association has stated this position consistently to municipal leaders, provincial representatives, aligned energy industry partners and regulators in correspondence and in meetings throughout 2021 and is continuing to in 2022.”

Leslie Anderson, CEO and President of the Propane Gas Association of New England, spoke regarding challenges in her segment of the United States. “New England attracts extreme bills, we have a lot of party line voting and there are dirty politics,” she said. “Emotional mindsets are much more common than in the past.” She noted that in Maine, like in many parts of the world, leaders are pushing for more heat pumps.

Across the United States, Anderson has worked with others in the propane industry to enact Energy Choice Legislation which stops cities and counties from restricting consumer energy choice. Legislation passed in Utah states, “A municipality may not enact an ordinance, a resolution, or a policy that prohibits, or has the effect of prohibiting, the connection or reconnection of a utility service to a customer based upon the type or source of energy to be delivered to the customer.” Currently, 37 percent of U.S. propane gallons, 3.5 billion out of 9.4 billion gallons are protected by such legislation.

Steve Kossuth, Vice-President, Global LPG Supply, UGI Corporation, believes that advocacy is the answer and that propane has a great value proposition. “It is safe, affordable and reliable,” he said. “We represent a reduced carbon solution at an effective price that is available now. Energy choice is really important.” Kossuth noted serious problems with the electric grid that have occurred in Texas in February of 2021 and wild fires resulting from electrical brown outs in California. In Europe, he said 40 percent of natural gas coming from Russia was a bad diverse portfolio.

Kossuth discouraged what he calls advocacy that is simply “dismissive advocacy” where industry members simply dismiss electrification as a bad idea. “We must demonstrate how propane effectively participates in the shift to decarbonization. It is important to focus on advancing the message for the government leaders all the way down to the consumers. We need to show how our product complements the world’s approach to decarbonization.”

THE NEXT SESSION: THE FIGHT FOR OUR FUTURE: BATTLING ELECTRIFY EVERYTHING

Immediately after the “Heat is On” session regarding International challenges, nearly 200 Conference attendees packed into a session specifically regarding the challenges in the United States titled, “The Fight for our Future: Battling Electrify Everything.” This session, moderated by Rich Goldberg, President of Warm Thoughts Communications, stressed the immediacy and importance of fighting the battles against bans on propane while promoting propane as playing an important role in decarbonization.

“There are people who are not interested in bridges. They want to ban internal combustion,” Goldberg said. “Most people want to reduce carbon emissions, but very few want to support taxpayer funding of the pathways to lower emissions.” The session included testimony from state leaders including Joy Alafia, CEO and President of the Western Propane Gas Association, Leslie Anderson who represented the Propane Gas Association of New England who spoke at the previous session and Matt Meehan who serves on the New York Propane Gas Association’s executive board.

Alafia, who participated remotely due to a COVID-19 positive test, shared a pre-recorded power point presentation regarding experiences in California which has the country’s most stringent laws. “The goals are to reduce greenhouse gas emissions. Tactics are to embrace all low or negative carbon solutions, provide an equitable path to clean energy, and to provide energy resiliency.” According to Meehan, people will be educated about the need for solutions involving propane, “Once the full costs, inefficiencies, inequities, risks and restrictions of choice are understood, they will be open to using more practical and affordable clean fuel options, like propane gas, to improve the climate.” 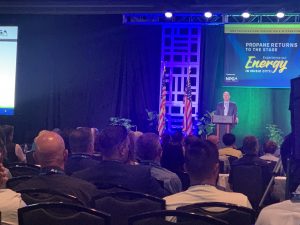 Later in the afternoon, opening ceremonies were headlined by NPGA CEO and President Steve Kaminski and PERC CEO and President Tucker Perkins. Kaminski had opened remarks at the LP-Gas Magazine Hall of Fame Dinner the night before saying that the propane industry is an industry under attack. In remarks at the Opening Ceremonies, he stressed the importance of getting a lion’s share of the U.S. Government’s infrastructure Package’s $7 billion to be spent on propane and supporting states on energy choice. Perkins pointed out that the Post Office was buying 90 percent gas-powered trucks despite a Biden Administration call for phasing out purchases of gas-powered vehicles. The Post Office had said it could not afford an all-electric fleet. He pointed out Senator Manchin was launching support for an “all of the above” energy bill. 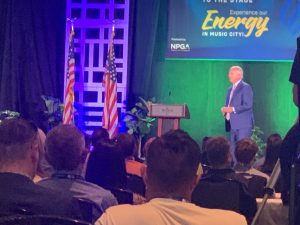