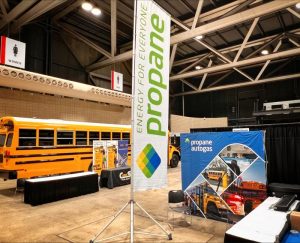 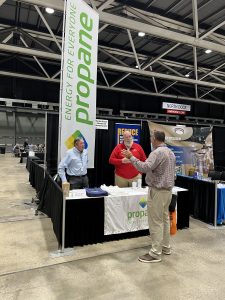 Porth shared with attendees that he had served as a School Board member in the past and understands the challenge of maximizing the educational goals of the school district. Porth explained to numerous attendees how propane school buses represent an opportunity to save money and help the environment. “That’s more money for teachers and their classroom needs,” Porth said. While Missouri PERC has been very successful promoting propane school buses, Ahrens posted a message on LinkedIn asking where the math teachers were when the federal government awarded nearly $22 million for rural Missouri electric school buses:

Even educators benefit from education! Here we are in Kansas City, the state’s hot-spot for propane school bus fleets, with success stories in every direction. Yet, the federal government just awarded nearly $22 million for rural MO schools to add 55 electric buses. That’s $395k per bus and doesn’t cover the entire cost of the unit or the charging station.

For that same amount, districts could have put 200 propane buses on the road and REDUCED EMISSIONS in the process. Yes—nearly four times as many vehicles and cleaner air in the bargain. That’s because the carbon intensity of electricity in MO is twice that of propane since 74% of our electricity is generated by coal plants. With electric buses costing almost four times as much as conventional (gas, diesel, propane) units, you are looking at a massively inefficient use of resources.

Where are the math teachers!?

Congratulations to East Prairie, the only Missouri district to get federal money ($30k) for a propane bus. Even with the crazy funding disparity, your community will come out ahead.

Stop by the MASA/MSBA show today at Bartle Hall—so much good news to share in the propane bus space, including MOPERC’s Clean Bus Replacement Program which provides an additional $2000 per propane bus.