Recent storms in Kentucky and at other places in the US remind us of the importance of helping friends and neighbors recover from natural disasters. Earlier this year, Ferrellgas formalized an expanded partnership with Operation BBQ Relief. A statement from Ferrellgas 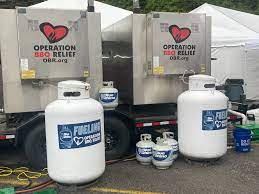 From tornadoes to hurricanes and wildfires, dozens of natural disasters strike the United States each year, causing staggering amounts of damage and disruption and sometimes even injuries or fatalities.

That’s where Operation BBQ Relief comes in. Formed in 2011 in response to the devastating tornado that tore through Joplin, Missouri, Operation BBQ Relief and its volunteers, many of whom are competitive pitmasters, have since responded to nearly 90 natural disasters and served more than 9 million hot barbecue meals to first responders and victims.

Recognizing an opportunity to do even more, Blue Rhino parent company Ferrellgas has formalized an expanded partnership with Operation BBQ Relief. Now that Operation BBQ Relief’s deployments are growing in size and complexity, the organization needs larger tanks and more gas to fuel their commercial cookers. No company is better equipped than Ferrellgas to fill that need. 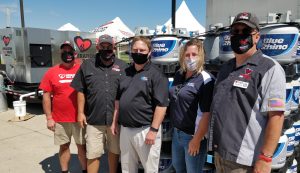 Not unlike Blue Rhino, which boasts tens of thousands of exchange locations in all 50 states, the District of Columbia, and Puerto Rico, Ferrellgas is a nationwide propane company providing retail propane service to homes, businesses, and farms. The footprints of both Ferrellgas and Blue Rhino, combined with the desire of their employee-owners to help their neighbors during times of need, make them the perfect partners to support Operation BBQ Relief at deployments throughout the country. It’s a part of Ferrellgas’s Century Project, where the company is focusing on doing important things in social, environmental, and governance arenas as it approaches its 100th birthday.

“Our deployments to various natural disasters across the country have evolved since 2011,” Hays said. “We continue to rely heavily on Blue Rhino barbecue tanks but we’re also bringing in industrial-sized smokers that require a larger power source. Ferrellgas has already supported recent deployments, including the December 2021 tornado response in western Kentucky. We’re thrilled to have formalized this expanded partnership and look forward to continuing to work with this great company to serve the healing power of barbecue to those affected by disasters.”

For more information about Operation BBQ Relief, visit its website at https://operationbbqrelief.org/.